My new body of work “Elephant’s Foot” consists of graphite drawings based on found images of a large, lethally radioactive glob of melted matter inside the Chernobyl Nuclear Power Plant that formed following the nuclear meltdown in 1986. Because this object is extremely radioactive, it was only perceivable through images captured with a remotely controlled camera and through very restricted, timed visits to the premises. While the project carries ecological and political implications of a major catastrophe, it is also a personal reconciliation with my childhood in Belarus, where the cultural and emotional consequences of the disaster were always present but never fully revealed as a physical or perceivable object.

The drawings investigate how the materiality of graphite interacts with the restrictions of flat image representation on a plane. The dark but reflective quality of graphite also refers to the inaccessiblity of ‘dark’ abstracted space. This interest holds further research possibilities for me in the medium of 3D rendering. I am currently getting acquainted with 3D software in order to investigate how the 2D source images of the steam corridor where the Elephant’s Foot is located, and the object itself, can be translated or reconstructed into a 3D mesh/skin, and how the incomplete and dark characteristics of those images will translate into abstraction.

For those who may wish to view the “Elephant’s Foot” project in progress at A.I.R. Studio Paducah, I will be hosting an open studio on February 20, 2016, 12-4 pm (or by appointment). I am in Paducah (the “Atomic City”) until February 27, at which point I’ll be traveling to the Banff Centre in Alberta for the month of March to continue my work and research on the “Elephant’s Foot”. 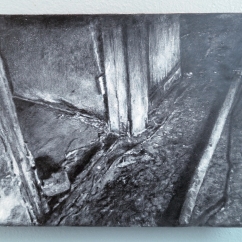 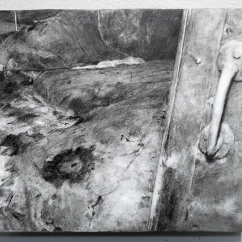 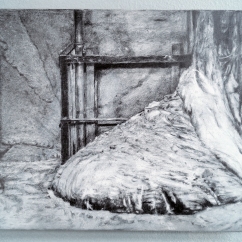 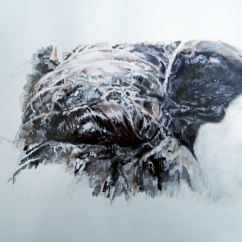 This project is made possible with the generous support from The Canada Council for the Arts.

View all posts by sashaopeiko