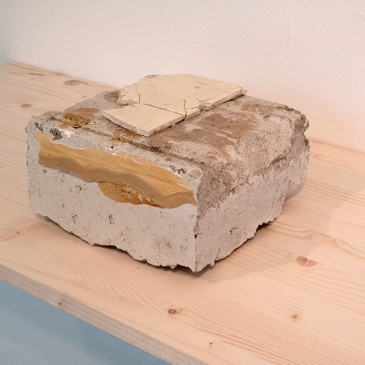 wood’n blues (for JPKK and what is lost on the mantra). found concrete block, “wood’n blues”, personally used iPod with headphones, 2013 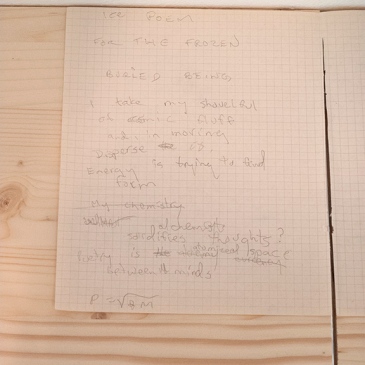 ice poem. graphite tracing of a found poem (found inside a copy of Physics for Poets by Robert H. March), 2013 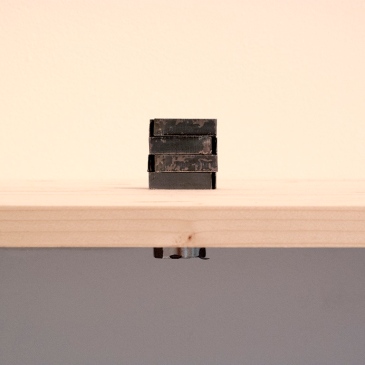 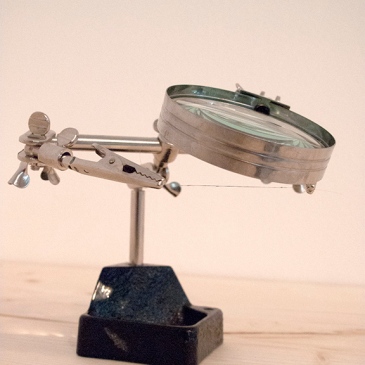 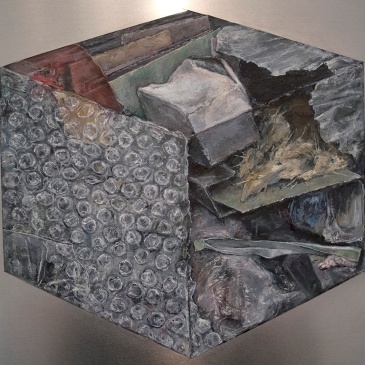 a project statement [or smooth spaces speaking in furious latin,

or folding to sedentary fractions, or things lived with overnight].

08.30.2011: Last night I discovered a large body of a dead lizard, a very long tail, dumped onto a full trash can, uncovered its face, hidden by a curved shadow. Today I was burning a bicycle seat (perhaps in Flann O’Brien’s nightmares of molecular exchange, I was cremating someone’s body). There was too much fire, I covered the thing with a piece of dented sheet metal, and later, lifted the curved shadow.  In the forest, I discovered a constellation of vague animal bones.  I stuffed every bit in my empty backpack. The weight of the mammal on my back was like books, two novels, or one dictionary, or three pocket anthologies of poetry, rattling their rhythms and rhymes on my bicycle.

12.20.2012: Blue stack. Little morsels of steel of the triangular variety. Something like one centimeter thick, the weight of each something like a centimeter thick. Stacked, two at a time. The alteration of the diagonal divide spiraling with every level. At the top, there is a gap, folding.

04.22.2013: Last night there was a slab in my hands, about three centimeters thick. They were not my hands. The slab was much in the same shape as a painting I did before, but it was not green. The slab was all black inside, solid like rock at first, but sticky at the epidermal layer, like fish skin.  I was seeing this from inside-out before it started to unfold itself. The outermost layer was flimsy flakes of gold leaf.  The object divided itself in half, horizontally, with the outermost layers sticking to the hands, I could not see the hands anymore.  The solid black guts were turning not really liquid, but immaterial, dissolving, shimmery, the kind of electrical shimmer one sees when the eyes are closed. The body was slipping away, or the mind, there was no difference.  A voice beside my ear was telling me how this abyss was a frightening experience, and this death is not something that should be hidden into at that time, it was trying to stop the event from completing, and in my own voice I was thinking – no this is just what I need, the immaterializing blank. I was almost gone.

“The museum at Vrana near Marathon contains a child-burial dated to the beginning of our era which utilizes a pair of beehives placed end to end … it is difficult to resist the impression that any serviceable container was acceptable for the body of a child.” (Garland, Robert. The Greek Way of Death. Ithaca: Cornell University Press, 1985. 78.)

I ordered this, clean wood box
Square as a chair and almost too heavy to lift.
I would say it was the coffin of a midget
Or a square baby
Were there not such a din in it.

The box is locked, it is dangerous.
I have to live with it overnight
And I can’t keep away from it.
There are no windows, so I can’t see what is in there.
There is only a little grid, no exit.

I put my eye to the grid.
It is dark, dark,
With the swarmy feeling of African hands
Minute and shrunk for export,
Black on black, angrily clambering.

How can I let them out?
It is the noise that appalls me most of all,
The unintelligible syllables.
It is like a Roman mob,
Small, taken one by one, but my god, together!

I lay my ear to furious Latin.
I am not a Caesar.
I have simply ordered a box of maniacs.
They can be sent back.
They can die, I need feed them nothing, I am the owner.

I wonder how hungry they are.
I wonder if they would forget me
If I just undid the locks and stood back and turned into a tree.
There is the laburnum, its blond colonnades,
And the petticoats of the cherry.

They might ignore me immediately
In my moon suit and funeral veil.
I am no source of honey
So why should they turn on me?
Tomorrow I will be sweet God, I will set them free.

The box is only temporary.